This is way late, but I won the caption contest over at Avoiding the Muse! Thanks to all who cast votes, and to C.Dale for holding such a cool contest. Thanks to Eduardo, too, for kicking ass throughout. Now, on to the next level of captioning...

*****************
Finally reading The Brief and Wondrous Life of Oscar Wao. I know I'm way late to the party, but good God, I dig. A question on the footnotes: I read them, enjoy them, but did anyone read the book and skip them? Not quite sure how much weight I should put on them... Anyway, a glimpse:
"Life was not always pleasant. Plenty of acts of violence, plenty of beatdowns and knifings. He himself survived any number of gank-attempts, and after each shoot-out, after each drive-by, he always combed his hair and straightened his tie, a dandy's reflex. He was a true gangster, gully to the bone, lived the life all those phony rap acts can only rhyme about"

Killer first line of the moment:
"And this, then, is the wonder of evolution:"
from Mary-Lou Brockett-Devine's "Crabs"
(RATTLE 32, Winter 2009)

Because there's never a bad time... 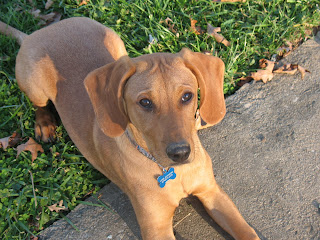 Boone is less of a puppy and more of a dog these days. Have started bringing him along on my 3-5 mile runs (don't think he's yet ready for the long stuff). He does alright, though he bristles at the short leash and occasionally throws up half-chewed pencaps on the road shoulder...

I found out that the Brooklyn Review is nominating my poem from their latest edition for a Pushcart Prize. A very cool honor to be nominated, especially considering all the other rockin' poems in that issue (which you can read online). This is my first nomination.

Have poems in the latest issues of Tar River Poetry, Third Coast, and RATTLE (links to TOCs). From what I've read so far, I'm lucky to be in all of them. There are some really great poems all around. Humbling, it is. Also--have two new poems appearing at La Fovea. Many thanks to Lisa Fay Coutley for inviting me to send. Yet another poetry bad-ass I met at Sewanee.

But enough about me, how are you? Submitting to magazines? (I've been slacking) Applying to fellowships? (I am) Writing and reading poems? (just the latter for me right now) Ready for Thanksgiving? (Good God, Yes. Bring on the sweet potatoes with mini-marshmallows).

Killer opening line of the moment:

"He carved the bowl for her, a hull so small"

from Jehanne Dubrow's "Bowl, in the Shape of a Bristol Boat"
(Third Coast, Fall 2009)

College basketball has officially started. UNC rants and raving to recommence immediately. Glad to see we signed Harrison Barnes, even if he does seem like a cornball.

I need to buy batteries for my camera so I can post some current pictures of Boone. He's becoming a monster (albeit, of the very cute and pleadingly-eyed variety). Up to almost 40 lbs. at around 5 months.

This inexplicable run of acceptances has continued. Potomac Review took a poem from my manuscript, and Sou'wester took three. That makes 8 poems taken by five journals in the span of a month. I've never experienced anything like this and would hazard to guess I won't again. I'm so used to rejection slips that I'm not quite sure how to take this...but doing my best to enjoy the ride. Looking forward to Spring and seeing all of these poems appear. Random question, how do you decide which previous pubs to include in your bio? Is there any proven rationale to this? (a relatively worthless query, I admit)

Caption Contest round 3 has gone live! The judges seem to pick up what I'm putting down, though the voters are not with me as of yet. View and vote for your fave!

Killer first line of the moment:

"I didn't know I WAS until the next day's news"