Haven't Made It to the Mountaintop

To be jealous, obviously, is natural and common, particularly in the arts. Italian poet Dante Rossetti feuded with his sister Christina for years because he believed she unfairly received more recognition than he. Bands of every genre, from the Fugees to Van Halen, have all been reared by jealousy’s ugly head. And everyone seems to take shots at Jonathan Franzen since his mug made Time, whether or not they’ve actually read Freedom.

In a small city like Seattle where each of us writers and artists are a degree or two of separation from one another, simple jealousy goes farther than the stem of an empty wine glass. What you say over that glass only rears more jealousy, fooling yourself into believing you haven’t made it to the mountaintop because of someone, something, else — but really it’s just you.

-Brian McGuigan writes about Jealousy in the arts over in CityArts

The signs of the coming apocalypse are many, but none are starker than this Web headline in the April issue of O: The Oprah Magazine:“Spring Fashion Modeled by Rising Young Poets.” Yes. Spring fashion. Modeled. By rising young poets. There follows a photomontage of attractive younger women — some of whom are rising poets mostly in the “I get up in the morning” sense, but all of whom certainly look poetic — in outfits costing from $472 to $5,003. This is all part of O’s special issue celebrating National Poetry Month,edited by the noted verse aficionado Maria Shriver and includinginterviews with “all-star readers” like Bono, Ashton Kutcher, the gossip columnist Liz Smith and someone named James Franco, who is apparently an actor.

In his first major address since ordering American airstrikes on the forces and artillery of Col. Muammar el-Qaddafi nine days ago, Mr. Obama said the United States had the responsibility and the international backing to stop what he characterized as a looming genocide in the Libyan city of Benghazi.

I'm applying to residencies for this coming fall/winter. This will be the first time I've ever applied to these sorts of things and I'm not sure what expectations I should have. I know I've already missed deadlines for some great places, but figure I'll apply to three or four amazing-seeming places and see what happens. 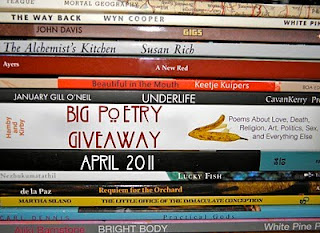 I'm way stoked to participate in the most-excellent brainchild of Kelli Russell Agodon, the 2011 Great Poetry Giveaway. Comment on this blog-post (make sure to include your email address, so I have a way to contact you!) anytime between now and April 30th, and you'll be entered to win one of the the two books below as a celebration of National Poetry Month. I'll choose two commenters using a random number generator and mail those folks a copy of one of the following books. A little info on the books and why they're here:
1) 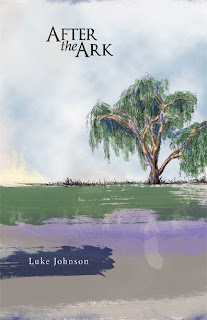 After the Ark is my first collection of poetry, published in January of 2011 by NYQ Books.
2) 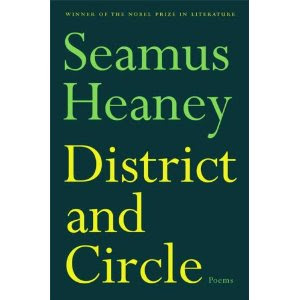 District and Circle by Seamus Heaney is the other book I'm giving away. Heaney is my favorite living poet and is one of the reasons I love poetry. This book is full of superb sonnets.
Comment on, blogosphere! Happy poetry month!
Posted by Luke Johnson at 7:26 PM 35 comments:

Thanks for showing up, sunshine.
********
Go here, download the recording, fall in love with an amazing band I've been telling you about forever.
*********
Killer first line of the moment:
"We think of lifetimes as mostly the exceptional"
from Jack Gilbert's "Highlights and Interstices"
(The Great Fires, Knopf, 1996)
*********
D.A. Powell is the guest editor for Best New Poets 2011.
Great choice for a great annual anthology. Looking forward to seeing the 2011 edition, for certain.

Posted by Luke Johnson at 8:23 AM No comments:

Now, Julie, at last, you know “what kingdoms
Come,” farewells past, wary to the end, but took
Too long, who, like Adam, knew the names
Of things so well, “lilac, forsythia, orange,
Sharon rose,” whom T.R. taught bone’s dance,
In turn so many taught to sing that tune,
Argued with Wordsworth, also everyone else,
Old crank, plagued by demon alcohol, older,
More dangerous demons, too, led hurt, wounded
Young into that dark, “You are a poet,” once
To bright student, “God help you,” but did not,
Injured yourself, know how deep the shadow
Cast, so smart, unaware, tough, ambitious, then
Told by editor, too old, poetry is for the young,
Yet hard lines, bare words, incantatory, strong,
Those poems remain, alone, God help you, yes.

R.H.W. Dillard's long-awaited seventh collection consists of a sequence of fifty-two poems, each sixteen lines long, each addressed to a dead poet or several times to more than one dead poet. Each is a meditation of sorts upon that poet's work, secondarily that poet's life, and ultimately, all together, upon the life of poems themselves in a continually violent and inherently unjust world. The syntax of these poems is shattered, interrupted by bits and pieces of other poems, memories, reflections, echoes, dates, journal entries, explosions, &c., &c., constituting in part a "demonstration" of how the mind actually deals with poems (and, for that matter, with the business of living).

Posted by Luke Johnson at 9:35 PM No comments:

There are a number of amazing, inexplicable, surreal things happening all at once: I had a poem accepted to appear in Southwest Review; I found out my book was the number 2 bestselling poetry title in February at Small Press Distribution (and, in turn, the Poetry Foundation's bestseller list for Small Press titles); an interview and review have been posted over at The Fine Delight featuring myself and After the Ark (Many thanks to Nick Ripatrazone for his excellent project and careful attention); and I'm preparing to fly to North Carolina next week, where I'll be reading and visiting classes at my alma mater, Elon University.
I'm not sure how I got so lucky--but I feel incredibly blessed to have such a warm and generous response to the poems. Wowzas.
*******
His productivity, never high to begin with, has slowed with age. He finishes poems at the rate that Antonio Stradivari constructed a violin. "I often don't write more than a couple of lines in a day of, let's say, six hours of staring at the sheet of paper," he told the Paris Review in 1977. "Composition for me is, externally at least, scarcely distinguishable from catatonia."
-Great piece on Richard Wilbur from the Wall Street Journal

********
Rhythm isn't just decorative. It serves a purpose even in a book like "Moby-Dick," which aspires to social realism. Melville could well have made his opening line "Call me Richard"—it was a popular American name then as now—but it lacks the tragic Old Testament resonance of Ishmael. It also doesn't sound as good as Ishmael, whose two gentler stresses balance out the sentence's strikingly stressed first word. What's more, "Call" and "el" chime off each other, resulting in a sentence that's as sonorous and inviting as "Call me Richard" plainly isn't.
-WSJ

*********
Fiction-making media (not just movies and TV but, as Season Five makes clear, newspapers too) fumble into drippy sentimentalism or stiffen into overly righteous emotion when dealing with grief. The Wire contains moments of grief uncompromised by special pleading or “framing,” though the purity of feeling can’t be separated from ambiguity. Nothing matches the elegiac grandeur of the solo spiritual, “Jesus On the Mainline,” sung—fieldshouted—at D’Angelo’s funeral. Never mind it’s mourning for and by a drug-running society. The song doesn’t ask us to sympathize, only to witness grieving. And much later, the mere sight of the abandoned boarded-up houses where Marlo has stashed bodies is an image of loss, of houses not as beds of culture but dumpsters for dead human beings: the houses represent all the species of concealment, misdirection, and devaluation of the human that every social order in The Wire engages in.
-W.S. Di Piero writes elegantly about The Wire
*********
Beyond stoked to see Macklemore tomorrow night--it'll be his last show in Seattle before he hits the national tour and blows up in the rest of the country.