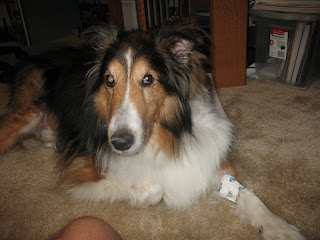 Laddie's had a rough summer. First we had two tumors (one malignant, one benign) removed in June at Virginia Tech. Then, all was well for about two months. Laddie stayed with my dad while I went to exotic locales (Boston, Ithaca, South Carolina, etc.). This was good, I got all of the affection from Laddie when I visited with none of the responsibility. I spent the summer as a deadbeat-dad to my dog. Though inevitably I missed the rascal, couldn't wait to get him back in the house. And I did after the first week of August. All was well. We got yelled off the newly sodded soccer field at Hollins, at which point Laddie went renegade and crapped all over that freshly manicured turf (take that random guy standing near the bulldozer!). We barked at strangers. We ate red meat. Men and dogs doing men and dog things.

Then came this weekend. On Friday morning, I noticed that the Laddie's eyelid wasn't going away (maybe you can see it in the picture, if you're looking for all the gory details, left eye), and I scheduled an appt at the Vet's office for Monday morning (as soon as they could...I knew it wasn't an emergency). So I fret and I coddle and I pet him behind the ears. Then Saturday arrives. After a joyous day of pooping and throwing up all over...I decide it's time to go to the Vet...but the regular vet is closed so we go to the emergency vetrinary clinic only to wait four hours to be seen. Laddie went renegade on the vet's office, too. Anyway, two nights in the vet's office and an-untold-amount-of-would-be-food-money later, Laddie is worn out and on a chicken and rice diet. For the first time today I was considering euthanasia (key word: considering, I'm still miles away from accepting). But 13 years is a pretty good run for a dog, I'd say.

As a cheery sidenote. Here's a picture of my new bookcase, though it's not really new, it actually has a very rich history. It was given by my mother to Cathy Hankla in the late 70s, when my mother was the chaplain at Hollins and Cathy was a grad student, and then passed on from Cathy, now Hollins MFA program director, to me (it was hot-pink when I received it, dragged it onto the balcony to paint it black): So this has been a productive week for me. Unfortunately, it's not new poems (one might be finished, but it could hardly be called new as it's been in the tinkering stage for quite some time now); but, we have finally picked a wedding band. As in music, not as in leaves a tan-line on your finger. Rubberband, yes it's a cheesy name, but they actually funk out enough to satisfy me. Also, their bass player is Ben Folds brother. Shelley made me promise her that that's not the reason I picked them, and it's not, but I certainly am going to enjoy telling people that.

Also, the syllabus for the fall is done, or as done as it's going to be. I'm looking forward to the class, though I worry that I'm not giving them enough diversity, in terms of aesthetic. I really had to resist the urge to simply teach my favorite writers. But for poetry, we're reading: Elizabeth Bishop, Mark Doty, A.R. Ammons, Mary Oliver, Charles Simic, C.K. Williams, James Dickey, Adrienne Rich, Robert Lowell, Sharon Olds, James Wright, Mark Strand, Louise Gluck, Robert Penn Warren, and Frank O'Hara. It's tough with only six weeks for each genre, but there were a few on this list that I simply couldn't let myself leave out (specifically Bishop, Ammons, and Wright), but hopefully the students enjoy it. For fiction it was a little bit easier, as certain stories lend themselves to certain lessons, but there are a great number of stories I'm in love with that I can't wait to teach: "A Temporary Matter" by Jhumpa Lahiri, "How Far She Went" by Mary Hood, and "The Hermit's Story" by Rick Bass. These are just a few of my favorites, along with some others I feel obligated to teach: "Things They Carried" simply because it's gorgeous, "Girl" because Jamaica Kincaid is reading at Hollins this year, and "Silver Water" because I think the class will fall in love with it and hopefully seek out more Amy Bloom.

Well Fall Submission season is almost upon us, and I think I've got my list of where I'll be sending my first round. This list is much more ambitious than last year, and I can only imagine will result in across-the-board rejections, but a 23 year-old-boy can dream. For your viewing pleasure: Iowa Review, Barrow Street, AGNI, Virginia Quarterly Review, Colorado Review, Shenandoah, Gettysburg Review, Tin House, Meridian, West Branch, Alaska Quarterly Review, and Tar River Poetry. All magazines I've had the chance to get my hands on, all magazines I'd lose a fingernail to get in. Here's hoping the last two weeks of summer are productive.
Posted by Luke Johnson at 7:56 AM 2 comments:

This one has been on my mind as of late. A great poem for anyone in a long-distance relationship.

Let us love this distance, since those
who do not love each other are
not seperaated. --Simone Weil

Night without you, and the dog barking at the silence,
no doubt at what's in the silence,
a deer perhaps pruning the rhododendron
or that racoon with its brilliant fingers
testing the garbage can lid by the shed.

Night I've chosen a book to help me think
about the long that's in longing, "the space across
which desire reaches." Night that finally needs music
to quiet the dog and whatever enormous animal
night itself is, appetite without limit.

Since I seem to want to be hurt a little,
it's Stan Getz and "It Never Entered My Mind,"
and to back him up Johnnie Walker Black
coming down now from the cabinet to sing
of its twelve lonely years in the dark.

Night of small revelations, night of odd comfort.
Starting to love this distance.
Starting to feel how present you are in it.

The Return of the Dog 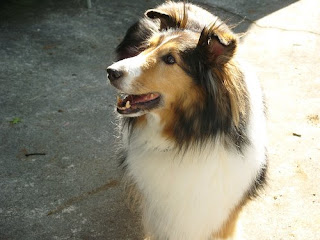 I have a thinly-veiled obsession with my pooch. He comes home this Friday from his summer at my dad's house where he's been while I've been traipsing up and down the East Coast. Needless to say, I'm very excited.
Posted by Luke Johnson at 10:59 AM No comments:

Middle-schoolers don't like Tim O'Brien, I do. This was a discovery I made over the past two weeks while I was teaching at the Young Writers' Camp at Mercersburg Academy in Pennsylvania. They do, however, like poems that rhyme and stories with dogs. Rick Bass was a hit, as was Jack London; they liked the E.B. White, Elizabeth Bishop, and William Meredith poems I brought, but my oh my, they did not like the Things they Carried. I know what you're thinking...really, Luke--You brought in a gruesome story about Vietnam and taught it to sixth graders? Not quite, I picked just about the most tame passage I could find, but the sentences were incredible, the pacing, but they would just not get on board. Anyway, it's not a huge deal, I was simply a bit crestfallen as I love his prose, and was sad to see the students didn't.

I read this passage from Rilke's Letters on the last day: "A work of art is good if it has sprung from necessity. In this nature of its origin lies the judgement of it: there is no other. Therefore, my dear sir, I know no advice for you save this: go into yourself and test the deeps in which your life takes rise; at its source you will find the answer to the question whether you must create. Accept it, just as it sounds, without inquiring into it. Perhaps it will turn out that you are called to be an artist. Then take that destiny upon yourself and bear it, its burden and its greatness, without ever asking what recompense might come from outside. For the creator must be a world for himself and find everything in himself and in Nature to whom he has attached himself."

In other news, I'm still riding the Best New Poets wave, though I arrived home to six rejections (count 'em: Yale Review, Gargoyle, Poetry East, Michigan Quarterly Review, FIELD, and Southern Humanities Review) which effectively took my head out of the sky, despite kind notes from the editors at MQR and Gargoyle. Anyway, I told my friend and former professor (and poet) Kevin Boyle about the good news, and he informally invited me back to read at Elon during the spring, more news there once things become more official. It would be a tremendous honor to read at my alma mater.

Three new poems up at the Dead Mule School of Southern Literature today. If you don't know the journal, keep an eye on it, they publish some great poems and each one is accompanied by a "Southern Legitimacy Statement" which trumps a Contributor's Note by a Mile.