Of Charlotte's Web fame, and a former member of the Sage Chapel choir (the church where my father preached at Cornell), a lovely little poem.

This is what youth must figure out:
Girls, love, and living.
The having, the not having,
The spending and giving,
And the melancholy time of not knowing.

This is what age must learn about:
The ABC of dying.
The going, yet not going,
The loving and leaving,
And the unbearable knowing and knowing.
Posted by Luke Johnson at 2:12 PM No comments:

Al Green is Back

If you haven't heard it yet. Please, please, please go check out Al Green's new album "Lay It Down." It was produced by Ahmir Thompson, who you might know better as ?uestlove from the Roots. It's the old lovesick Reverend, with features from familiar voices like Corrine Bailey-Rae as well as the new generation of soul singers: Anthony Hamilton and John Legend. Regardless, it's an instant candlelight classic for me.

Now back to the shameless self-promotion, a poem of mine will be up in the new issue of storySouth, set to debut either tomorrow or sometime soon after. It's an oldie, from my junior year in undergrad, though looking back on it I can't find too much to hate (which is quite an anomaly for my old poems). Either way, I'm a huge fan of the magazine. They've featured so many of my former and current professors (from Kevin Boyle and Drew Perry to Cathy Hankla and Thorpe Moeckel), so I'm honored just to be included. Also, I've got three poems up at GHOTI magazine, a great web-zine edited by some past Hollins MFA-ers.

So I've started a new project, something which I'm excited about and gives me an outlet for these summer months, a chapbook entitled "Doc Watson's Greatest Hits." I've taken the titles of some 30 Doc Watson songs and simply seen what poems result. It's an interesting experiment, starting with a title before having written the poem. Contrary to what I expected, it's been liberating as it simultaneously dictates a starting point and allows me to toy with the expectations created by a title. It's also nice to take a break from the bigger project, the thesis, which is so centered in the first person narrative and personal experience that sometimes it's a bit daunting to immerse myself in for too long.
Posted by Luke Johnson at 1:55 PM No comments: 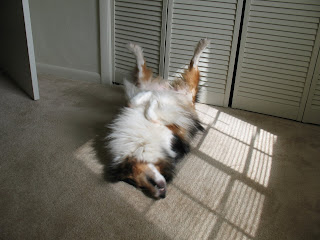 As you can see, all of this news of sickness has done little to sour Laddie's good mood.
Posted by Luke Johnson at 4:28 PM No comments:

Looking back on this blog after a year of its existence, I realized that pretty much everything that had been written here was useless, uninteresting, or self-involved. Generally some horrifying combination of all three. So I deleted virtually all of the posts I've made up to this point, and I'm trying again; although I'm not sure what exactly it is that I'm endeavoring to accomplish.

This is my first summer in the Blue Ridge, and I'm ready to enjoy it. Unfortunately it seems as though I won't be spending much time here. In a few weeks I'll be putting on my grown-up boots and heading to the Solstice Writers' Conference at Pine Manor College (just outside of Boston) where I'll get the chance to study with Stephen Dunn. They've been generous enough to give me a scholarship to attend, if only my car survives the trip. After that it's down to Pennsylvania and Mercersburg Academy where I'll be leading a Nonfiction workshop at a Young Writers' Camp. Having never attended a conference or a 'camp' before, I'm not sure what to expect from either. Though I'm hoping to collect some poems along the way. It's a bit frustrating, with all the syllabus making for next fall, planning for this summer, and dog anxiety (Laddie has a tumor on his abdomen that is being removed next week), I haven't gotten much writing done. Probably because I've been wasting time doing things like reevaluating the literary merit of my blog and watching college softball games on ESPN. Nonetheless, I have nothing to do for the next three days except commiserate with my desk, so hopefully it will be a fruitful weekend.

And again with the self-involvement. Though I understand that no one reads this, I feel compelled to write something that someone else may actually care about. Maybe I'll try again tomorrow. Until then...
Posted by Luke Johnson at 3:54 PM No comments: