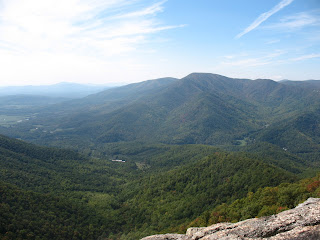 Above is a picture of the George Washington National Forest taken this past weekend on our backpacking trip. It was an amazing two days of hiking, covering just over twenty miles. That's the good news, the bad news is this was one of my only free weekends this semester and rather than find some productive writing time, I took off into the woods. I maintain it was worth it.
I've discovered that teaching drastically affects writing time. I'm not sure what I expected, but since the semester started (6 weeks ago), I've only written five poems. Count'em. Between preparing fellowship applications, reading student poem packets, and sending out submissions, I just haven't found the time I need. It certainly makes me glad I was so productive this summer, but it does make me worry. My naive and optimistic hopes extend in every direction: it will be easier to teach the class in the spring since I'll already have done it once and I'll have more free-time, I'll travel less and be home more, revisions won't take as long as I think they will, my thesis will attain some semblance of an arc before it's all said and done, etc. etc. etc.

But enough with the whining. On the submission front, I've gone through with my overly-ambitious fall cycle, and have heard back with nothing but rejection. I was encouraged by some friendly notes, evidently a poem made the final round at The Southeast Review, I was a finalist in the River Styx contest, and received kind notes from Tar River Poetry and Columbia Poetry Review. Beyond that, it's been thin-envelopes stuffed with blank rejection slips. But I suppose that's the way the game goes. At least some poems are still in the wind that I can hope the best for.

In other news: My poem "Laundromat" will appear in the Autumn/Winter 2008 issue of Poet Lore, due out in mid-October (translation: soon or now). Also, Best New Poets 2008 has been proofed and sent off to printers, expected to be released in early November. Pre-order your copy now!

It's about time for the sidewalks get crunchy.
Posted by Luke Johnson at 2:47 PM No comments: